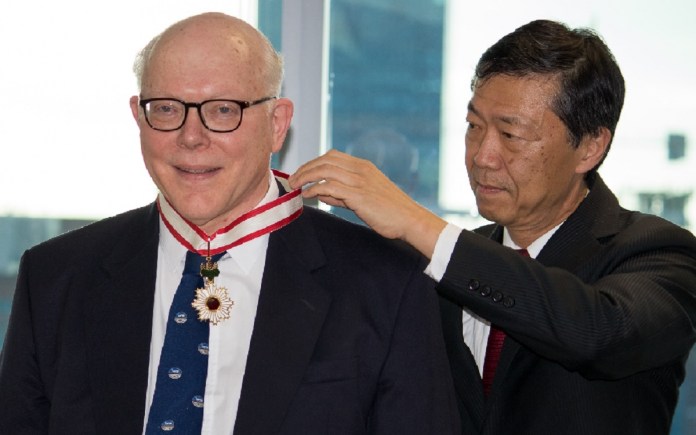 Emeritus Professor Doug Butterworth of the University of Cape Town receives the Order of the Rising Sun, Gold Rays with Neck Ribbon, from the Ambassador of Japan to South Africa, Mr Norio Maruyama.

Members of the South African fishing industry turned out in their numbers this week to honour fisheries scientist Emeritus Professor Doug Butterworth. He was presented with an esteemed award – the Order of the Rising Sun, Gold Rays with Neck Ribbon – by the Ambassador of Japan to South Africa, Mr Norio Maruyama.

Professor Butterworth has previously received South Africa’s highest National Order of Mapungubwe (Silver) for contributions to the betterment of the environment and sustainability of fisheries.

The new award was conferred on behalf of the Emperor of Japan. It was in recognition of Butterworth’s contribution to ensuring the sustainable use of marine living resources by Japan. In particular southern bluefin tuna, one of the world’s most valuable fisheries. https://www.fishingindustrynewssa.com/2019/05/21/accolade-uct-professor-honoured-by-emperor-of-japan/

“He played a leading role in the development of the scientific method that underlies the management of the hake fishery. As a result, our stocks are healthy and our fishery is recognised worldwide as sustainable and well-managed.”

The deep-sea trawl fishery for hake is by far South Africa’s most valuable fishery, delivering an estimated R6.7 billion to the economy each year. It is also the only fishery in Africa to be certified as sustainable and well-managed by the Marine Stewardship Council (MSC). MSC is a certification and ecolabelling programme for sustainable wild-caught seafood.

“Without the scientific expertise of Prof Butterworth and his colleagues at the University of Cape Town’s Marine Resource Assessment and Management Group (MARAM) and the long-standing commitment of the South African government, we would not have been able to secure and retain MSC certification,” said Brown. https://www.fishingindustrynewssa.com/2017/04/30/merits-certification-creating-value/

Based on the scientific recommendations of its own scientific personnel – backed up by the specialists within MARAM – the Department of Environment, Forestry & Fisheries sets annual catch limits for the deep-sea trawl fishery.

It also ensures that the fishery is properly monitored and controlled by conducting frequent checks on fishing activities, both at sea and in port.

“We congratulate Professor Butterworth on the receipt of this prestigious award from the Emperor of Japan,” said Brown.

“His advice on fisheries is sought by fisheries around the world. We are appreciative of the role he has played in securing the international competitiveness and success of the deep-sea trawl fishery for hake.”